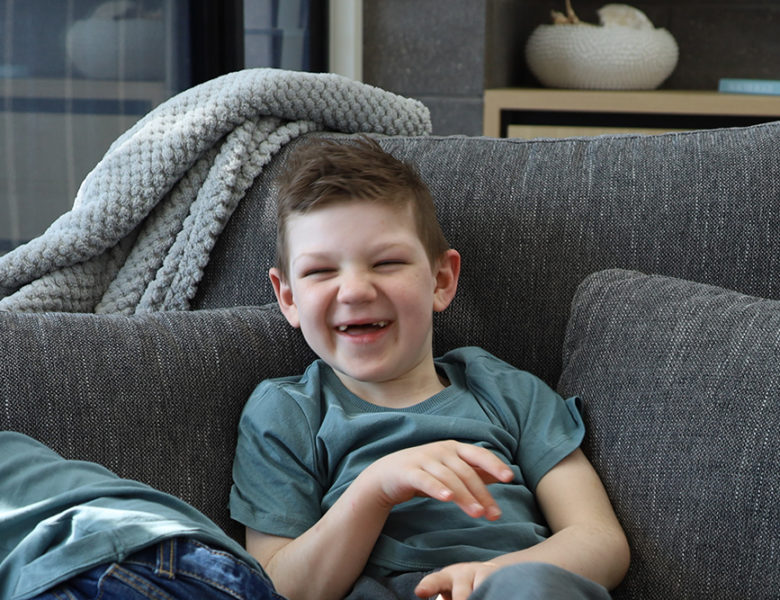 Update on the Lovett brothers

“All the kids were together, dancing around and having a good time. Declan was never left out and was always included,” Keira said of her family’s Christmas in their hometown of Port Lincoln.

Keira and her partner Bobby Lovett, bravely shared the story of their sons, Connor and Declan, for the WCH Foundation’s 2020 Christmas appeal. The appeal raised funds to support families like theirs whose children are in palliative care at the Women’s and Children’s Hospital.

At just three-years-old Declan was diagnosed with leukodystrophy, an incurable neurological disorder that affects the central nervous system. His older brother Connor was diagnosed with the same condition just months later. Leukodystrophy impacts on every aspect of the boys’ lives, including their speech, hearing, and walking.

Over Christmas Declan first suffered a stomach bug and an ear bleed which saw the family visit the Women’s and Children’s Hospital Emergency Department.

Kiera said other than these minor health issues the brothers’ health was actually really good and they had a wonderful Christmas. Christmas started early with a $300 voucher gifted to the family from Big W, a WCH Foundation corporate partner.

“Connor, Deccie and Evie-Lee all loved going to the store and choosing whatever they liked. They all chose a Diana and Roma doll.”

The family then headed back to Port Lincoln to spend time with family over the holidays which Keira described as feeling like “a big weight lifted off our shoulders when we got back”.

“As soon as we got to Port Lincoln, Connor just clicked and he was a different person, he was so much calmer. Declan was so much happier as well; we all were I think,” she said.

“My favourite memory was seeing the boys have an absolute blast with their relatives. On New Year’s Eve, Declan was sitting on his aunt’s lap and dancing by throwing his arms around in the air. I sat back, watching him, thinking he is having an absolute ball.

“His cousins would also push him around in a cart in the backyard. They always included Declan and had a great time.”

The year ahead for the Lovett brothers

Now it’s back to reality and the school year has started for the boys. Connor is heading into year three and Declan into year one. 2020 vs 2021: Declan and Connor ready for their first day back at school with their little sister Evie-Lee. Look at how they’ve all grown in a year!

“Declan is excited to be back at school, but Connor is a bit anxious,” Kiera said.

“Connor has declined quite rapidly with his walking and he’s very self-conscious about it.

“He knew he could do it before and now he can’t do it. He worries about what people are going to think.”

The services available to Connor at school will be expanded this year, with another SSO joining his support network.

Kiera hopes with some encouragement from Connor’s SSOs he will start venturing outside more at recess and lunch to explore the school yard, dig in the sandpit and kick a ball with his friends.

“I think this will boost his confidence, keep his muscles going and help stop his busy mind from stressing about every day life,” Kiera said.

In the coming month the boys will be back at the Hospital for a few appointments. This includes Botox in February to alleviate leg pain, ENT and neurology appointments. These appointments are co-ordinated by their palliative care nurse Danni.

Support for the Lovetts

The support the Lovett’s have received over social media since the Christmas appeal last year has been overwhelming.

Keira has received numerous messages of support in her inbox in the past few months, some connecting her to other families who have gone, or are going through, similar journeys.

One connection is Cheryl Minniss whose son Mason had a similar condition to Connor and Declan. Cheryl set up The Mason Minniss Fund in honour of her son and is a good friend of the WCH Foundation.

In the early days of the Lovett’s hospital visits the Fund donated a gift card to the family. The Christmas appeal has reconnected the two mums again.

“Cheryl is lovely and she’s provided me with support and advice over the past couple of months,” Kiera said.