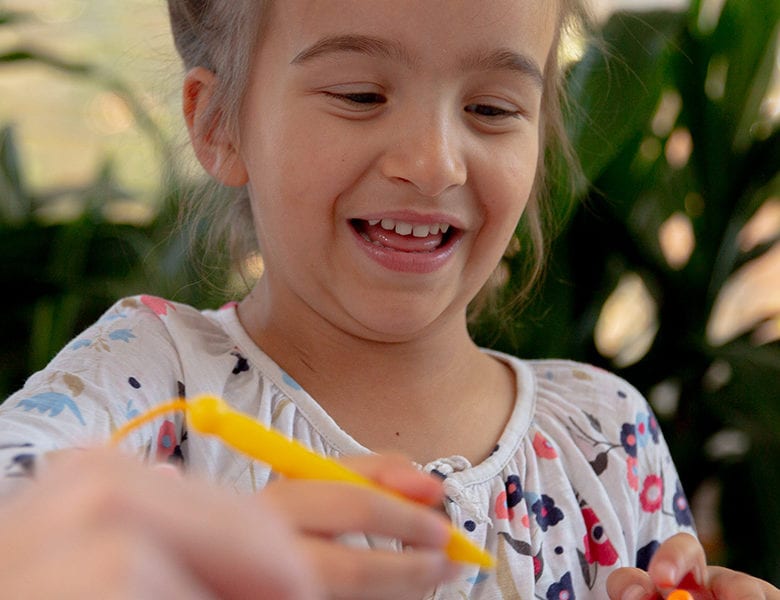 At two-years-old Maddie was diagnosed with Stage 4 Neuroblastoma. She has now spent more than 415 days at the Women’s and Children’s Hospital.

Play Therapy played a crucial role in her recovery.

At just two years of age Monique’s daughter Maddie was diagnosed with Stage 4 Neuroblastoma. In the first two years of treatment, Monique and Maddie spent 415 days at the Women’s and Children’s Hospital.

“It was gut wrenching and terrifying to be told your daughter has cancer,” Monique said.

“I noticed her sleeping was restless and she had an extreme temperature. After several GP appointments, blood tests and scans, a massive tumour was found behind Maddie’s stomach. The cancer was already spreading to her hips and shoulders.”

The Hospital became Maddie’s home for the next two years, as she underwent months of chemotherapy to shrink the tumour to a ‘safer’ size where it could be operated on. An operation that would last eight hours removed 95% of the tumour. The remainder of the tumour required further aggressive chemotherapy and radiotherapy.

It was a situation that no child should go through.

But sadly, there are so many children like Maddie, who in order to get better must spend months or even years of their life in hospital. And it’s for children like Maddie that make programs like the Women’s & Children’s Hospital Foundation’s Arts in Health program so important.

A large part of the Arts in Health program is to give children access to play – the one thing that is so crucial to their development and mental health.

Each day specially trained Play Therapists like Chelsea work closely with patients like Maddie, to incorporate play into their day, helping to minimise their anxiety, stress and trauma.

Monique recalled, “One day a doctor pulled me aside and said to me, ‘What is happening is devastating, but Maddie’s world is you and play and you’re going to give that to her’.

“I had to put away my fears and concerns, and act to Maddie like this is what you do at two-and-a-half years old! She had nothing to compare it to. Together with Chelsea, I tried to make being in hospital seem like it was ‘normal’. Play helped us do this and broke up the horrible feeling of being stuck in hospital. I don’t think Maddie ever felt like that. Through play she was always occupied and stimulated.”

One of Chelsea’s main aims of Play Therapy is to create positive experiences for patients. However, for Maddie, Play Therapy had a far bigger impact. Watch Maddie’s story above to see the incredible role that play had in Maddie’s recovery. Please support play in your Hospital

Please, make a donation today and help to ensure we can continue to fund and expand these critical services, helping children like Maddie now and into the future.

Learn more about our Arts in Health Program at the Women’s and Children’s Hospital.