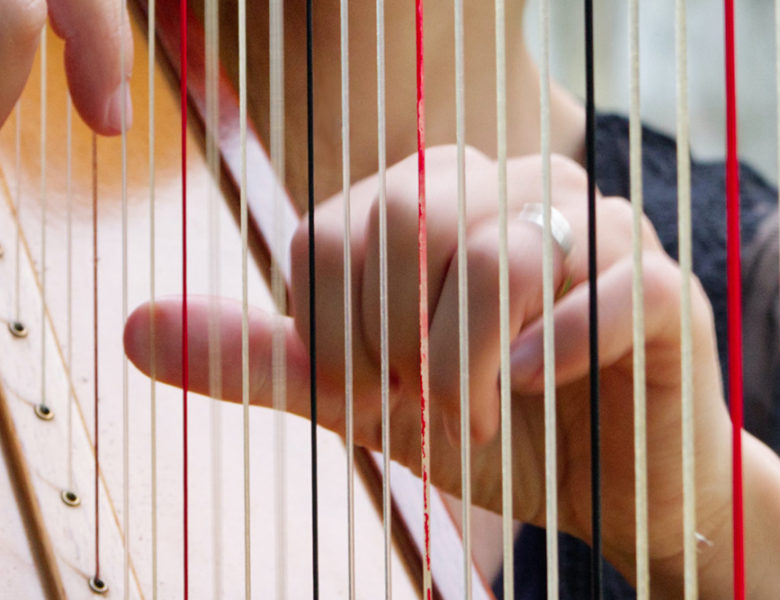 Musician Ilona Weir treats tiny babies, their doting parents, and staff in the neonatal nurseries to harp performances every week.

Ilona’s performances are proudly funded through the WCH Foundation’s Arts in Health program. Arts in Health worked with the neonatal growth and development team at the Hospital to establish the Music for Wellness sessions.

While the magical music is a joy to listen to, research shows the tunes also have positive health impacts on pre-term babies.

“The research shows the most appropriate tunes for babies are very simple, repetitive, calm tunes,” Ilona, who has been playing the harp for 20 years, said.

“If you played fast music it would be overwhelming, the music is designed to keep them very calm.” Ilona Weir playing the harp in the neonatal nurseries at the Women’s and Children’s Hospital.

The benefits for babies include:

In November 2020, new parents Mandy Lewis and Stuart Sampson, welcomed twin daughters Sage and Kora born at 28 weeks. The neonatal nurseries cared for the twins and whilst there they heard Ilona play. They told their story to The Advertiser ahead of World Prematurity Day.

“It was really special to share that with the babies,” Mandy told The Advertiser.

“They were a little bit cranky to begin with, but as she (Ilona) started playing they went to sleep, so I think the beautiful music really soothed them, really relaxed them.”

Ilona said the harp tunes don’t just create a soothing environment for families but are also beneficial for staff.

“It’s also for the staff so I mix it up by playing some slowed down pop tunes, tunes that people are familiar with,” Ilona said.

“I’ve received positive feedback from families and staff. They come up and say to me ‘thank you’, ‘the music is beautiful’, and ‘it’s very calming’. I can really see the benefits of harp music in the neonatal nurseries.”