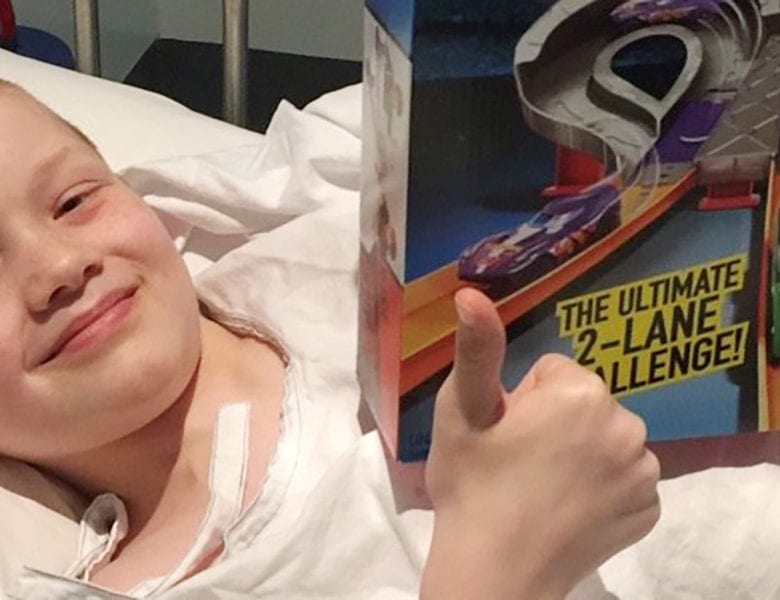 At age 9 Cameron was diagnosed with Leukemia.

Play Therapy helped to keep his mind off his terrifying diagnosis.

In 2015, Rebecca Aloisi received the news that changed her family’s life forever – her nine-year-old son Cameron was diagnosed with Acute Lymphatic Leukemia and needed urgent treatment at the Women’s and Children’s Hospital.

The times ahead would see challenges that no family should have to face. Cameron’s first round of chemotherapy extended over a year. Six months later he relapsed. With treatment unsuccessful, Cameron was close to being admitted into palliative care. When describing his cancer diagnosis, the Hospital stays and treatment Cameron uses the word terrifying.

Cameron is not alone with his fear of being unwell and in hospital. Each day hundreds of children across our state are in hospital, away from their friends and homes and facing uncertainty of what their next day, month and year holds.

Funded by donations from the community, the WCH Foundation’s Play Therapy program seeks to distract children from the anxieties they face. Each day specially trained Play Therapists work closely with patients like Cameron, to help them feel at ease and ensure that they can keep being kids, despite the situations they face, situations that even many adults would struggle with.

Play Therapist Chelsea is assigned to the Michael Rice Centre, where cancer patients including Cameron are cared for.

“Chelsea always had Lego and playdough for me because she knew I loved that,” Cameron said.

“Playing with playdough and Lego was the only thing that kept my mind distracted from the terrifying parts of being in the Hospital. If Chelsea hadn’t of been there, I have no idea how I would have kept my mind off all the terrifying stuff every single day.” For Cameron’s mum Rebecca, she felt like Chelsea was part of her family’s journey from the start.

“When you’re feeling scared about your child’s health and their future, having access to a Play Therapist felt like you had someone in your corner,” she said.

“I was able to focus on Cameron’s treatment without having the huge worry that he was completely missing out on being a child. Our longest stay in the Hospital was two months, that is a long time for a child to be away from their school and friends.”

“Kids with cancer have to come to Hospital over and over again for anything from six months to a couple of year. I need to provide them with positive memories and fun experiences, so they’re not scared to come back next time,” Chelsea said. “Whether they are having a small or large procedure, or if their treatment is for an hour or a week – for a child everything is huge.

“Sometimes when they arrive, they’re already upset, anxious and concerned about what is going on. If this happens, I need to move quickly to get them distracted and away from how they are feeling.”

A moment Cameron’s mum holds close to her heart is how Cameron used play to say thanks to her for being by his side every single day.

“Cameron made me a paper crown with diamonds. I wore it as he was being wheeled into surgery for his bone marrow transplant. I’ve never felt more special than I did in that moment, I was so proud to be his Mum.”

After more than two years of unsuccessful treatment, doctors at the Women’s and Children’s Hospital suggested that Cameron take part in a world-first trial and undergo a bone marrow transplant – his donor would be his younger brother Jamie. Since the transplant, Cameron has undergone regular tests. At the end of 2019, his results were extremely positive and showed there are no Leukemia cells present and the transplant was a success. Cameron now returns to the Women’s and Children’s Hospital every six months for check-ups and of course when possible catches up with Play Therapist Chelsea.

Please support Play in your Hospital.

Please, will you consider making a donation today and help to ensure we can continue to fund and expand these critical services, helping children like Cameron now and into the future?

Learn more about our Arts in Health Program at the Women’s and Children’s Hospital.