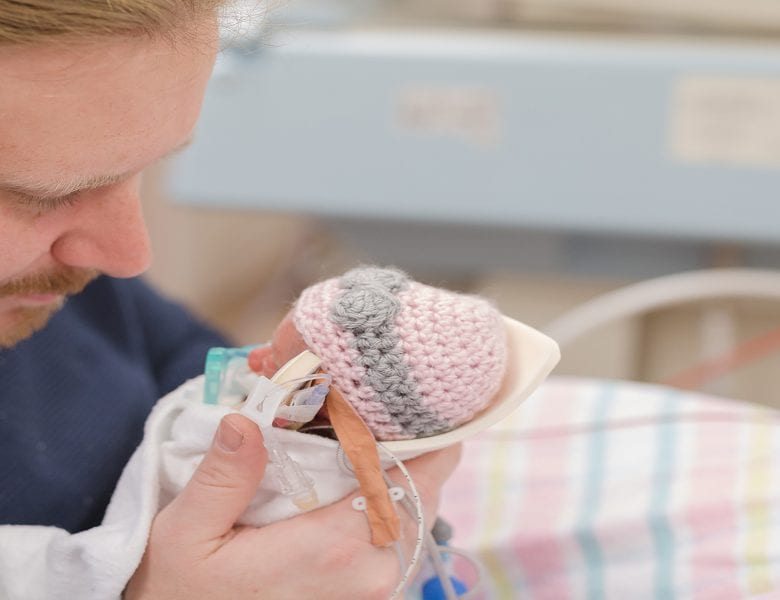 Twin sisters Isla and Eloise Fleming were born at the Women's and Children's Hospital. Weighing only 480 grams, Eloise was so tiny she fit into the palm of her dad's hand.

Please take a moment to watch the Fleming’s story and donate today to support the greatest care for the tiniest patients.

One in 12 newborns at the Women’s and Children’s Hospital will need special care from our Neonatal Intensive Care Unit team.

Help us provide the greatest care for the tiniest babies and support your Hospital.

Shannon and Nicole Fleming had known from the early stages they would face a complicated pregnancy.

“We were always told that twins were going to be high risk, but in comparison to what we went through, we had no idea,” says Nicole.

At 17 weeks pregnant, Nicole was diagnosed with twin-to-twin transfusion syndrome (TTTS) – a prenatal condition where twins share unequal amounts of the placenta’s blood supply resulting in them growing at different rates. Eloise was receiving less blood flow and as a result the amniotic fluid around her was incredibly low, whereas her sister, Isla, was surrounded in it.

Surgery was required to allow each twin to develop independently. The surgery was high risk and there was a chance that one of the girls would not survive. But if nothing was done, both girls would not make it to birth.

Against the odds, Isla and Eloise survived the surgery, however their challenges were far from over. Isla had developed a heart condition and Eloise received a blockage in her brain. Weekly scans became the new norm, each time Nicole and Shannon just hoped both girls were alive.

“Each week you go in there not knowing if you are going to see two heartbeats or one heartbeat and every week we kept on seeing two,” says Shannon.

At week 28 of the pregnancy, the family and medical team made the decision that if either of the girls were going to survive, they would need to be delivered soon.

At just 29 weeks, on August 22 2018, Nicole gave birth to two beautiful baby girls born at the Women’s and Children’s Hospital. The twins were born holding one another’s hand. Like is the case with most babies born prematurely the girls were rushed into the Hospital’s Neonatal Intensive Care Unit (NICU).

“NICU is a place where no parent ever wants to be, but once you are there you are so grateful for the people who work there,” says Shannon.

Despite the successful birth of both twins, at nearly four weeks of age the cardiologist advised that Isla’s heart was struggling, and she would require heart surgery.

Heartbreakingly, the morning after the surgery Isla passed away. Pictured in NICU with wires and machines filling the background – Nicole and Shannon hold Isla and Eloise. In between their parents, older children Amelia, Eamon and Ciara are all smiles looking at their baby sisters. It’s the only photo of the family of seven together.

Isla’s passing was an emotional and heart-breaking time for the whole family, but when asked about the time, Nicole reflects there was a chance during the pregnancy that both twins might not have survived.

“No-one knows what NICU is until you need NICU. Obviously, we went through the worse experience but at the same time we cherish our time and came out with a healthy little girl and got to meet our twins,” says Shannon.

Eloise spent almost three months in NICU and the Special Care Baby Unit. She was able to go home for the first time in November 2018, with oxygen and a gastric tube for feeding. Eloise was still tiny, weighing 1700 grams.

“We continue to follow up on Eloise’s health issues. Because she was so small, developmentally she still is catching up on her growth. While we were in NICU it was a hard time and a sad time and the NICU staff helped get us through so much. We miss Isla terribly, but we are so grateful for Eloise. We were told that she wouldn’t be here and to have our little miracle by our side is all because of them,” Nicole says. Shannon and Nicole Fleming with Eloise at their Adelaide Hills home. The family continues to see doctors at the Women’s and Children’s Hospital to monitor Eloise’s health.

Every year 4,500* babies are born at the Women’s and Children’s Hospital. Hundreds, like Isla and Eloise Fleming, will require special medical care to have the best chance at life.

Because of you, over the past five years the WCH Foundation has delivered more than $280,000 in funding to provide the greatest care for the tiniest babies and their families.

Your donation can make a real difference by providing support to families like the Flemings during what is an incredibly emotional time.

How we support the tiniest babies and their families

The NICU and Special Care Baby Unit waiting room is a space where families can seek respite without being too far away from their little ones.

The WCH Foundation is proud to fund the renovation of this room creating a more comfortable and relaxing environment.

Upgrade works include painting and the purchase of furniture, soft furnishes and artwork. A new fridge, more comfort necessities including a tea and coffee making area and phone charging station, along with an activity centre for siblings will complete the room.

Special technology is continually created to help doctors and nurses provide greater care for the tiniest babies. Over the years the Foundation has funded medical equipment for NICU, including two SERVO-n ventilators with cutting-edge technology.

A majority of the babies cared for in NICU need artificial breathing support and while this can be life-sustaining it has the potential to cause lung injury. The SERVO-n ventilators with NAVA (neutrally adjusted ventilatory assist) technology uses signals from the baby’s own diaphragm to coordinate and assess their needs to support their breathing.

This advanced technology leads to decreased rates of lung damage and a reduction of time spent in the Hospital, ultimately improving the outcome for premature babies cared for at the WCH.

Like so many of the programs the WCH Foundation delivers into the Hospital, Twilight Story-time is designed to make time spent in Hospital feel better for families and positively impact on their wellbeing.

With calming music setting the mood, authors and literature educators read aloud stories in NICU at Twilight Story-time events held four times a year. The WCH Foundation gifts each family with a new book pack and soft toy to encourage parents to continually read to their newborns.

Reading aloud stimulates language and imagination skills even for the tiniest babies and provides emotional benefits for their family, as it is a great way for parents to bond with their babies especially in special care when physical contact may be limited.

The Mayfly Room is a private space for families experiencing the loss of their baby cared for in NICU.

Rebecca May, a Registered Nurse in NICU, recognised the need to provide these families with a private, home-like environment where they can spend precious time together throughout the palliative and end of life care process.

The space was developed with a grant received from the WCH Foundation and we continue to provide food and drinks supplies for the room and other items to support families through the extremely emotional time.