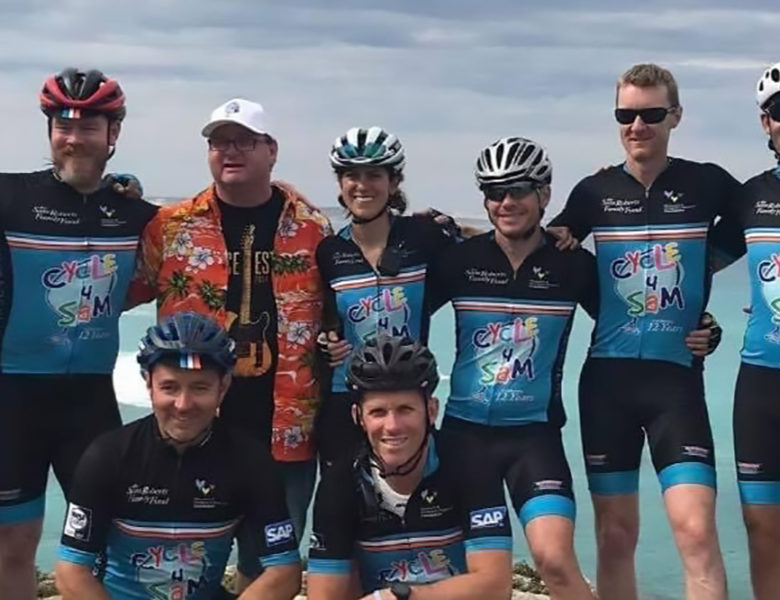 From what started as a ‘hello’ and wave across the fence grew into a much-loved friendship for the Roberts family and their long-time neighbour the late Hazel Glencross. Hazel died in late-2019 and left a bequest to the Sam Roberts Family Fund in memory of the boy she called ‘dear little Sam’.

Many in the WCH Foundation community will know of the Roberts family. Marty and Michelle Roberts’ youngest son Sam passed away in 2005 at the age of four after a courageous battle with Niemann-Pick Disease Type C, a rare neurological disease for which there is currently no known cure.  They established The Sam Roberts Family Fund soon after leading the charge on raising funds in Sam’s memory.

“The care we received from the Paediatric Palliative Care Service at the Women’s and Children’s Hospital was much needed and made a huge difference to how we enjoyed the limited time we had with Sam.” Marty said.

This was the inspiration behind setting up Cycle 4 Sam – a biennial bike riding event which has so far raised over $750,000 for the WCH Foundation. The event helps other families supported by the Paediatric Palliative Care Service. Due to COVID-19, the Roberts family were unable to undertake their ride last year, so they were deeply appreciative to learn that Sam’s fund was to receive a special gift from Hazel.

“Hazel was a lovely lady who had long supported our efforts to raise money in Sam’s memory,” Marty said. “To learn that she has included a gift in her Will for Sam’s Fund is very special indeed.” During her lifetime, Hazel was a proud member of the Women’s Auxiliary Australia Air Force (WAAF) at the end of World War II. She travelled extensively in Europe and the UK, as well as working in the diplomatic corp in Asia.  She moved to Darwin around 25 years ago to join her son, Andrew, and his family who had relocated there.

“Hazel was our next-door neighbour when I was a young boy, and growing up she always remembered our birthdays,” Marty recalled. “Over the years she became a much-loved family friend and we stayed in touch, even after she moved to Darwin.”

Marty’s mum Margaret said, “Hazel often spoke about Sam because she called in on one of her Adelaide visits when I was looking after him. She called him ‘dear little Sam’. She was a very dear friend to us all and it’s such a lovely thing that she has done in leaving a bequest.” You can dedicate a gift in your Will to the WCH Foundation in honour of someone you have loved and lost as a wonderful way of ensuring their memory lives on.

“Hazel had several conversations with staff here at the WCH Foundation when preparing her Will. She was clearly very passionate about ensuring that she could leave a gift in Sam’s memory.  She once said, ‘it won’t be a sheep station, but I’ll leave what I can’. We are so pleased to now be able to honour her wishes,” Fern Cargill, WCH Foundation Bequests and Research Manager said.

For a confidential discussion about leaving a Will gift, or to request wording for your solicitor, click here or contact Fern Cargill, Bequests and Research Manager, on (08) 8464 7900.

The Cycle 4 Sam will return in 2021 with preparations currently underway – stay up to date with the latest news here.