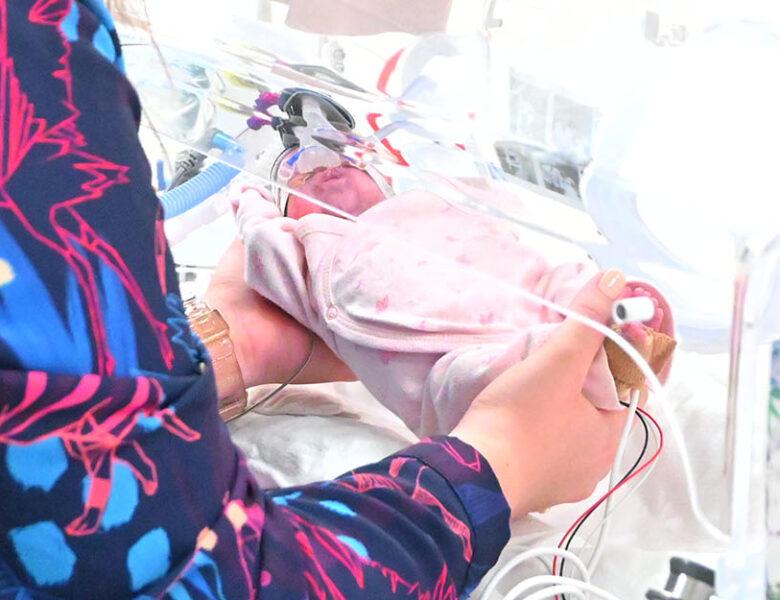 Milestone moments for the tiniest babies

Alexandra and Joshua’s baby girl, Charlee, was born at just 23 weeks. The couple’s wedding rings could fit around her arm like a bangle.

“Everything was smooth sailing in the pregnancy, we thought that once we got through that 20-week scan, everything would be fine,” Alexandra explains.

“But at 22 weeks and 4 days, I just wasn’t feeling well. I couldn’t work out what it was, but something didn’t feel or look right.”

“We went to Lyell McEwin Hospital, where they discovered I had bulging membranes and told us there was nothing that could be done for babies born before 23 weeks. So, at that stage, we could only wait and watch. Hoping we could keep her in, but also knowing she could be born at any minute.”

The family were transferred to the Women’s and Children’s Hospital with the goal of keeping baby Charlee in for as long as they could to give her a chance of survival. Alexandra, Joshua and Charlee in NICU.

“Going to the hospital, we knew something was wrong, but we didn’t think it was that wrong,” Alexandra says.

“It was a really big couple of days. We saw a lot of people and had to make a lot of decisions.”

“We were lucky in the sense that they were able to give me steroids before 23 weeks, to give her lungs and brain the best chance.”

After a few days in the Hospital, Alexandra had an ultrasound and discovered her waters had leaked and her contractions had begun without her realising.

“The doctors said to us, ‘Right, this baby’s going to be born this morning,’ and we were glad she had made it to 23 weeks at least so they could help her. She decided to stay in there until the afternoon though, I think she wanted to prove them wrong!”

Charlee was born weighing in at just 560g. She was taken straight to the Neonatal Intensive Care Unit (NICU) and has been there since. She’s facing lots of challenges still, but her doctors and nurses say that despite her size, she’s feisty and strong! Charlee’s NICU baby book is full of memories from her time in NICU.

We have provided funding for the creation of NICU baby books that are customisable and specific to these families. The idea, brought to the WCH Foundation by NICU nurses Natasha Woodall and Robynn Lindner, recognises that milestones for a NICU baby can look very different. This book gives families the chance to remember big moments such as coming off the ventilator, reaching 1000 grams or graduating from NICU.

“The NICU nurses showed me the catalogue of all the different pages I could use, and I’m a kindy teacher so I was excited about the arts and crafts!” Alexandra laughs.

“While Charlee is this tiny there’s not really much I can do hands-on. Often, I’m just sitting there for hours, so it’s nice to print the pictures and do some writing.”

“I also love the idea for when she’s older she can look back and see how tiny she was.” NICU nurse Natasha Woodall with one of the NICU baby books she created with fellow NICU nurse Robynn Lindner.

NICU nurse, Natasha Woodall, says, “Our team believes it is important to recognise and celebrate the birth of every newborn baby.”

“By providing families with a personalised baby book, we aim to enhance their memory-making experience that is specific to their NICU journey. These books will allow for parents to celebrate, record, remember, share and process this joyful and challenging season.”